The cargo bay and overmap received a major update - an ability to trade with other ships and stations in the sector.

Redesigned cargo bay* with receiving(left) and sending(right) beacons.
*the lower deck only

Instruction: HOW TO USE ASTERS GUILD BLUESPACE TRADING DEVICES

1. Acquire a Trading Program. Most ships are supplied with two disks with these programs - one in the cargo bay and second is in the Merchant's office.
2. Insert the disk into suitable device.
3. Launch the program.
PROGRAM INTERFACE

4. Set your account info by pressing "Account Number" button and typing the credentials. It is possible to use Asters Guild and other accounts.
5. Select the beacons by pressing "Receiving Beacon" and "Sending Beacon" buttons.
WARNING: IT IS NOT POSSIBLE TO BUILD MORE BEACONS AT THE CURRENT MOMENT.
6. Do the shopping!
6.1 Select items by pressing "Plus" and "Minus" buttons.
6.2 Press on the resulting total cost button to receive the shipment!
WARNING: MISUSING THE RECEIVING BEACON MAY END UP IN INJURY/LOSS OF LIMBS/DEATH/BODY DEGRADATION
Addendum:
Sending beacon allows for selling your commodities! Just press the "To Offer" button, fill the Sending Beacon with the commodity* and send away!

*see the required commodities on the "To Offer" screen.

The medical tools were also updated:

The injection speed now depends on your BIO stat.
Medical staff starts with a larger 30u syringe, print more from the medical disk.
Medical vendor assortment was expanded.
Outdated sprite bottles were replaced.

...Also, mechs. They received a code touch-up and their painting issue was fixed. Yes, now you can paint them!

Basic plumbing systems(see design doc for more information) was implemented. None of the plumbing machines are introduced currently, only the cloner and hydroponics trays support it. You can wrench down water and biomatter tanks to connect them to nearest ducts. Do not touch the odd-looking duct above the solidifier, it's a vertical duct heading to the cloner.
Some fluid-ducts(in the hydroponics and bioreactor room) are mapped roundstart.

Adding some old and new items to traitor items list.

-Badassery/Special Donut Delivery Case - 20 TC
Donut Case, that contain 6 unique donuts which buff one of the stat of consumer by +6 for 20 Minutes.
Case can be opened and closed like laptop, by pressing ALT+LMB.

-Highly visible and dangerous weapons/Prototype: psychic laser cannon - 12 TC
A laser cannon that attacks the minds of people, causing sanity loss and inducing mental breakdowns. Also can be used to
complete mind fryer contracts. Can shoot through walls and other peoples.

-Implants/Internal Energy Armblade Implant - 10 TC
Implant that can be implanted in arm, and on activation create an energy sword in user hand.

-Devices and tools/Mindreader - 20 TC
On wearer breakdown, create a paper with wearer memorys, like code from account and uplinks code.
Also, wearer can skip procedure, just activating Mindreader by him self.

-Returning an "Electrowarfare Suite and Voice Synthesiser" and "Portable autodoc"

-Syndicate "Self Destruct" trigger - 5 TC
Trigger that can only be installed on energy weapons, explode a weapon on shoot. 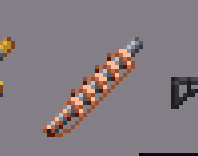 -Adding scopes for a weapons that can be used to increase Accuracy and Zoom out, by increasing Recoil of the weapon
Top
Post Reply
1 post • Page 1 of 1